Review: The Legend of the Golden Snail 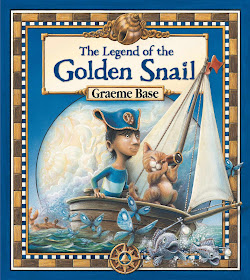 "The Legend of the Golden Snail was Wilbur's favourite story. He imagined the Golden Snail sailing through the Magical Realm to its home in the Spiral Isles, and he listened with wide eyes to the part where the Grand Enchanter banished it to the Ends of the Earth. There it was doomed to remain, so the legend went, until a new master came to claim it."

If you're not familiar with the magical story-telling and stunning illustrations of Graeme Base, then be prepared to fall under his spell instantly. Base creates stories that children want to read. And read again. Base is that wonder among chidren's authors - he doesn't churn out books at a headspinning rate, but when he does bring out a new book, you know you will just have to have it.


In The Legend of the Golden Snail, Wilbur sets sail on his journey to find the legendary Golden Snail, with the Captain's hat his mother makes for him and his cat. Along the way, he comes across wilting butterfly buds, a coral island that magically transforms into a monstrous sea-creature, and a crew of earwig pirates.

Will Wilbur divert from his quest for the Golden Snail to water the wilting butterfly buds? Or free the monstrous sea-creature? Or rescue the lantern-fish captured by the earwig pirates? And what will happen to his quest if he does?

Follow along as Wilbur does help all the creatures along the way. Feel his doubt at how diverting from his quest will impact on his role as a Grand Enchanter. Share his amazement as each creature then returns his kindness when he faces yet more obstacles on his way to the Golden Snail. Share his disappointment on finding the Golden Snail not quite as he expected. And experience his joy when, with the magical incantation...

"Snailing Ship, rise and shine,
Hoist your sails and trim them fine,
Taste once more the salty brine,
For with this spell I make you mine!"

...the Golden Snail comes to life and becomes so much more than he ever dreamed. But will Wilbur enslave the Golden Snail as its new master, or will he set the mighty beast free? And what will he learn about himself if he does?

Throughout Base's story, the illustrations will amaze and delight any child - and any adult too. Fans of Graeme Base will no doubt automatically seek out what it is they must discover on each page. For those new to Graeme Base, The Legend of the Golden Snail, as with all of Base's stories, has a hidden extra waiting to be found among the magnificent pictures.

~ This review is by new KBR contributor, Kate Schultz ~