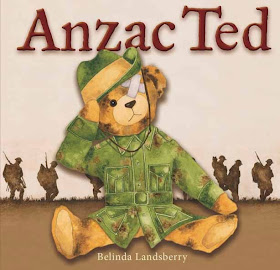 Anzac Ted is scruffy and worn. He is missing an eye, and an ear, and he’s not at all pretty to look at. The other school children don’t like him at all, but his owner knows he is special. He knows that Anzac Ted’s story represents something important to all Australians, not just the family who know and love him.

As we approach 2015 and the 100th anniversary of the departure of the first Anzacs, Anzac Ted offers parents and teachers a very age-appropriate way of sharing the story of Australia’s First World War soldiers with children.

Anzac Ted offers only the most general overview of the war – soldiers leaving family and travelling overseas to places where they felt scared and alone at times, but found courage to face hardships and danger and comfort in their friendships and the presence of their mascot, Anzac Ted.

The combination of colour and sepia-toned illustrations helps children transition between the two time periods and creates a more emotional setting for the part of the story focused on the war. The sepia-toned silhouettes of soldiers are particularly evocative.

Anzac Ted is the debut picture book for Australian author and illustrator Belinda Landsberry, who shares Ted’s story in rhyming verse. The story is beautifully told and gently introduces younger readers to the courage and sacrifice of the original Anzac soldiers.

There are teachers’ notes available for this title.