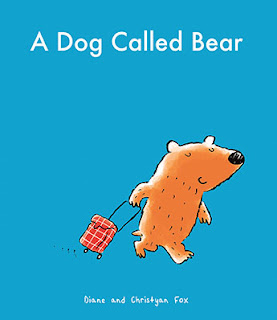 A Dog Called Bear is a quirky story about pets and differences, and it starts with fabulous endpapers that look like fur.

Lucy loves dogs, and having saved her money and read all about dogs, she sets out to find the perfect one to have as a pet. Her search brings her into contact with other animals who try to convince her that they would be a better pet than a dog. Frog can have a bath every day and fox would prefer to be a part-time pet.

Then Lucy meets an animal who claims to be a dog, a newly invented dog, but doesn’t look like any of the dogs she’s ever seen in her books. His name is Bear and he is soon on his way home with Lucy. Lucy and Bear have real personality, and Bear does have a special touch of ‘dog’ about him (I particularly loved the picture of him lazing in a dog basket with a smile on his face).
Unfortunately for Lucy, Bear hibernates for five months of the year and can be rather messy. And Bear discovers he doesn’t like fetching and carrying all that much. Lucy and Bear eventually become fed up with each other and it’s only after Bear runs away that he and Lucy discover they miss each other and resolve their differences.

A Dog Called Bear is written and illustrated by husband and wife team, Diane and Christyan Fox, who have created more than 40 children’s books together. This addition to their body of work is an enjoyable story with a simple message to look beyond differences.