Review: In The Shadow of An Elephant 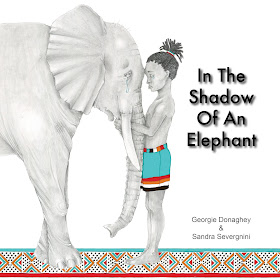 Lualani is a baby elephant that lives with her family on the African plains.

At night she sleeps cuddled into her mother. During the day she stands in her mother’s shadow as protection from the burning sun.

It is night when the sharp sounds split the calm and force the herd to scatter. Lualani is left alone.

She is found by the boy Jabari and his father, and taken to a place of safety to be fed and cared for. But Lualani longs for her mother until she realizes Mumma won’t be coming back.


Trust is built and a strong bond is formed between the elephant and the two humans. Their shadows become one until a tragedy occurs and the tables are turned. Now Lualani is the comforter, and the boy the broken-hearted.

When time and space separate the two friends, they both know that they will be reunited again at some future stage.

This is a delicate story, beautifully told about the hunt and slaughter of African elephants by poachers. This central theme is revealed in a non-confronting way through subtle allusion.

The  secondary theme of the strong friendship between animal and Man is the maintaining wall built around the poaching reference, as is the fragility of life, and the protection of wildlife.

Sandra Servergnini’s exquisite illustrations in pencil and watercolour sit as light as air on the page in cohesion with the gentle tone of the text.  Her portrayal of the separation of mother and baby projected on a dark background effectively relays the devastation felt by the two elephants. Decorative African trim at the bottom of selected pages adds that something extra. These same colours are the only ones used in all the illustrations. The rest is grey against white. The fly pages reflect intimate images replicated from inside the book of Lualani and Jabari together.