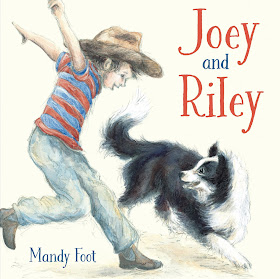 Joey and his sheepdog Riley are more than best friends. They live with Joey’s mum and grandad on a sheep station. One day things change. Mother and son move to town where there is no room for Riley to run and herd sheep.

Although grandad looks after Riley and sends informative letters daily to the boy, both Joey and Riley have lost parts of themselves due to the separation. Joey reads grandpa’s notes and thinks of hills. Riley sleeps on Joey’s bed and dreams that he is still in it.


After a severe storm, Riley’s collar is found by the creek bed and grandad’s letter informing him of this shatters the boy’s world. What has happened to Riley? Will Joey never see him again?

Grandad’s letters sweep across the page while Mandy Foot’s delicate, detailed and emotive illustrations tell the other half of the story. It is there in Joey’s body language – the hunch of his shoulders, his slouch, the way he sees his plates as larger than those on the farm, and the emptiness he sees when he looks around him. All this conveys his disinterest in life. Then there is the lack of animation in Riley’s actions that make the same feelings visible.

Powerful feelings connected to the isolation experienced in rural areas seep through the story to share the grief of separation experienced by the characters with the reader. It is like a small death.

This story is about love and what happens when that love becomes loss. Beautifully told, its divine images support the text with a story of their own. Just when you think that everything has been offered to the story inside the book, the stunning end pages covered in pencil images claim a life of their own, adding a seperate beauty to the whole publication.