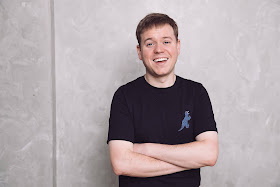 1. Tell us something hardly anyone knows about you.
When I was seven years old I wanted to grow up to become a magician! We came home one evening and there was a package in the mail; a prize I’d won for sending in tokens from a chocolate milk tin, this big suitcase full of magic tricks! I would torture my family with magic shows for about a month before all the cheap plastic magic sets broke and then I forgot about my dream.

2. What is your nickname?
Levins, Lev, Levdawg. Never Andy! I hate it when people call me Andy.

3. What is your greatest fear?
My teeth falling out from eating too much ice-cream. Or being told by the dentist that I can’t eat ice-cream anymore because it will make my teeth fall out. All my fears are ice-cream related.

5. Tell us five positive words that describe you as a writer.
Funny, stupid, gross, sweet, behind-deadline (sorry to my editors).

6. What book character would you be, and why?
Tintin! I’d love to go on adventures all over the world. Actually, maybe I’d rather be his dog, Snowy.

7. If you could time travel, what year would you go to and why?
2050, so I could see what weird new ice-cream flavours exist and then bring some back for my kids.

9. Who is your greatest influence?
I grew up reading Roald Dahl and Paul Jennings books. I loved how silly they could be while still telling such amazing stories. These days all I read is manga from Japan, especially shonen manga, which is written for teenage boys (or 35 year old boys who never grew up). My favourites are One Piece and Dragon Ball, two long-running stories filled with funny characters and epic adventures. I hope that one day I can write something as fun and addictive!

10. What/who made you start writing?
My dad. On weekends when I was little he would make books with me about animals and my sisters. He would write the words and I’d draw the pictures. He was one of the first people to read Nelson and he was super proud to see the physical copy.

11. What is your favourite word and why?
Awesome. I’m a very positive person, which means I spend a lot of time describing things as positively as possible. There’s a limit to how many movies you can describe as amazing, or how many meals are incredible. But awesome? Nobody ever gets sick of that word. It’s the awesomest way to describe something awesome.

12. If you could only read one book for the rest of your life, what would it be?
Can I say One Piece? It’s already 950-plus chapters long and the writer/artist Eiichiro Oda doesn’t have plans to stop writing it anytime soon. In theory, I could just keep getting new stories forever! 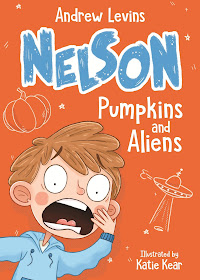 Andrew Levins has been a DJ since he was a teenager, and a food writer for almost as long. He cut his teeth as one of the inaugural DJs on FBi radio, plays most major Australian music festivals and hosts the longest-running hip-hop night in Sydney. His articles have been published by The Sydney Morning Herald, ABC Life, VICE, SBS, The Good Food Guide and Time Out. In 2007 he co-founded the youth music charity Heaps Decent (with Diplo and Nina Las Vegas), and in 2009 he was named one of Sydney’s 100 Most Influential People by The Sydney Morning Herald. Since then he’s had two kids, run a successful restaurant, released a cookbook and started no less than five podcasts. The Nelson series are his first books for children. For more information, see www.penguin.com.au.
Penny at 05:00
Share
‹
›
Home
View web version