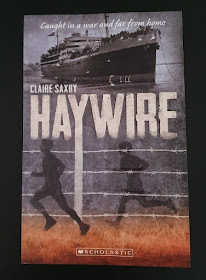 The setting is Hay, rural Australia, 1939, and is narrated in two parallel stories; one by Tom in Hay, the other by Max in Germany.

WW2 has broken out. Volunteers are eager to join up to fight for their country.

Tom is the youngest of three boys. Still at school, he is intelligent and diligent enough to get into Uni. But when his brothers Mick and Pete sign up, he’s forced to fill their role at the family bakery.

An internment camp is being built in Hay to house Enemy Aliens. 2000 of them – Italians and Germans, are on their way.


Many people hate them already as their water supply is limited. Plus, other resources will be drained.  But it is also an opportunity for some to make money.

Max is secreted away to England and his Uncle Ferdy, only to find that he lives in a tiny basement and cooks on a kerosene stove. As things escalate, the two encounter hostility. Their origins and accents become a threat. They are taken along with other Enemy Aliens to an internment camp, then onto a ship bound for Canada. Many drown after it’s torpedoed. The survivors are returned to where they started.

On the Dunera, this time bound for Australia and the internment camp at Hay, Ferdy and Max experience another attack. Max arrives alone, for Ferdy, traumatised by the first bombing, jumps overboard and drowns.

Tom’s home life has become a war zone. His mother is filled with anger and hatred for everyone and everything that took her sons away. She doesn’t stop harping about it, as the family buckles under the work load. Then tragedy strikes.

Max and Tom meet during the daily bread delivery. A tentative friendship is formed. They find they have a lot in common. Although Max acknowledges that not everyone sees the internees as the enemy, his grief and loss over Ferdy’s death consumes him. Impossible as it seems, all he wants is to get back to his parents. The eternal optimist Willy, who travelled on the Dunera with Max, comes up with a crazy idea.

Superbly written and presented, Haywire is a powerful read. It focuses historically, on the prelude to WW2 and the crumbling of people’s lives.