Review: The Good Son: A Story from the First World War, Told in Miniature 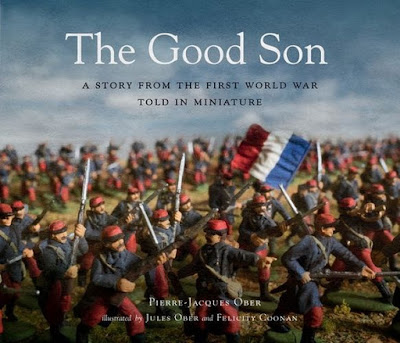 The Good Son: A Story from the First World War, Told in Miniature is an evocative story of a 'little soldier' and is based on true events.

Released to coincide with the centenary of the signing of the Treaty of Versailles, this picture book is suitable for older readers.

Set in the first year of the First World War, it tells the story of a French soldier who sits locked up because he left his post and was gone for two days before returning.


Although he did return, the soldier, Pierre, is charged with desertion. And although he had his reasons for leaving, and for returning, he is alone as he awaits his fate.

In isolation, he is caught up in memories and dreams. He remembers his family and friends, and the battles he has fought, and in particular an unexpected encounter he had with enemy soldiers. He dreams of things he still wants to do with his life.

The Good Son explores the nature of war, and the varied reasons men joined up to fight. It expresses thoughts and emotions created by the experience, and it is a heartrending reminder of the struggles of the ordinary people caught up in terrible events.

The creation of author and modeller, Pierre-Jacques Ober and his wife, photographer Jules Ober, with designer Felicity Coonan, the story of The Good Son is told through text and photographs, rather than illustrations that are drawn, painted or collaged.

The photographs are of miniatures, made by Pierre-Jacques Ober as part of a 'personal project ... developed into an homage to all the men who fulfilled their patriotic duty, unprepared for the horror unleashed upon them.'

The use of miniatures and photography brings to life the landscape and events of the war in a way that other kinds of illustrations cannot, and lends the story an intimate perspective. A note from the author and information about the process used to tell the story in this way are included at the back of the book.

The Good Son is moving and thought provoking. It would make an excellent classroom resource. It's also a great gift for teenagers or adults who have an interest in history, particularly military history.

Visit Litttle Soldier Stories for resources including study notes and a studio tour.