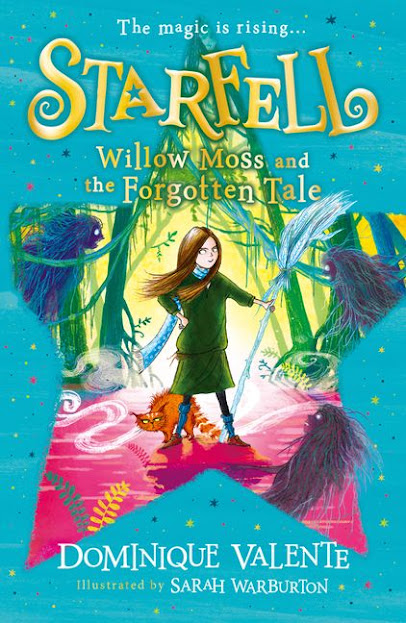 Now was not the time for Willow’s magic powers to misbehave. After receiving an urgent leaf mail delivered by a friendly oak tree, Willow is alerted to the news her friend Nolin Sometimes has gone missing.

Nolin has been experimenting with cross pollinating a memory flower with a Great Wisperia tree and can now successfully see 10 minutes into the future. What he sees is not good, it’s his own kidnapping and his letter requests Willow, if she wouldn’t mind to come and rescue him.

Young witch Willow Moss has the ability to locate anything that is lost.

Unfortunately, at the moment Instead of finding things, Willow’s magic is making things disappear including her kitchen and her sister Camille – her mother is not impressed. They did reappear eventually but that wasn’t the point.

Her pet kobold, Oswin doesn’t help matters with his confused sayings that make her mother even angrier. Oswin is Willow’s best friend, he might resemble a cat but is really a kobold – a type of monster who normally can be found buried underneath her bed. He has the bad habit of when he speaks getting sayings confused – making for hilarious and unwanted comments.

Willow insists she needs to go in search for Nolin and knows the perfect witch who can help her, Moreg Vaine.

Her mother threatens a family intervention, as she has been sick with a heavy cold and believes if she just rests, Willow’s magic will heal itself. There is absolutely no need to rush off to find the most powerful witch in Starfell, Moreg Vaine. Willow tries to explain to her family that she has teamed up with Moreg in the past when her grandmother passed away, but her family believe she is delusional.

Feeling like they will never believe her or truly be one of them – a true witch. Willow’s heart breaks as she makes the tough decision to make them disappear to give her a head start on her journey. Together with Oswin and her magical broom Whisper, Willow flies away from home and everything she has known.

In search of Moreg and the answers to Nolin’s disappearance, Willow will encounter wizards, strange boys that know her name, dragons, wind monkeys, blue elves, green sprites and the dreaded Queen of the Undead – not all of them friends.

Will Willow find Moreg and rescue Nolin? Can she finally prove her worth as a witch to her family? What does the dreaded Queen of the Undead want with Willow? Prepare to enter the magical world of Starfell and discover all its secrets.