Review: The History of Mischief 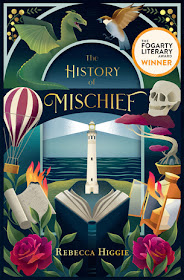 This magnificent and imaginative novel is the Fogarty Literary Award Winner. An historical journey through time, philosophers, paper cranes, origami and secrets, it explores human weaknesses and strengths through meaningful stories that link together.

Jessie has lost her parents in a car accident. She is now in the care of her older sister Kay. They have moved into their grandmother’s vacant house as she was placed in a home long ago.

In the corner of a room, Jessie finds the carpet torn. Beneath, the girls discover a metal box built into the floor. It hides an old book, The History of Mischief.

It contains a surprising and in-depth history of mischief and mischievous acts and their progression through time.

The entries begin in Athens with the philosopher Diogenes; how the codex fell into his hands, the repercussions of the mischief it caused, and how it got to Alexander the Great.

From Greece to Egypt and to Aristophanes, servant to the king, who works to confiscate manuscripts from incoming vessels to be added to the Library of Alexandria.

In China, its secret forests and tales of prophecies and weapons. In Poland, tales of dragons and ghosts come to life as the mischief goes to work on the men in the underground salt mines.

Thrilled by the French and then the Ethiopian adventures, Jessie finds herself testing out what she reads about in The History of Mischief with good intention, but which always get her into trouble. The journey leads to London, England, then Australia.

Jessie gets deeply involved in research about who these people were and why and how they were chosen by the mischief. The library is an endless source of information. Computer searches, books borrowed and inter-branching become an obsession.

These countless books distract Jessie from her grief. She makes friends with the unusual Theodore who at first is extremely irritating but later turns out to be a rock in Jessie’s life and she in his.

Rebecca Higgie is a Western Australian author and booklover. She has crafted a superlative novel full of adventure, history, magic and myth, as fluid and gentle as flowing water. The explosive ending shocks with its absolute perfection, for it reveals how far people go, what they will sacrifice, to shield those they love.