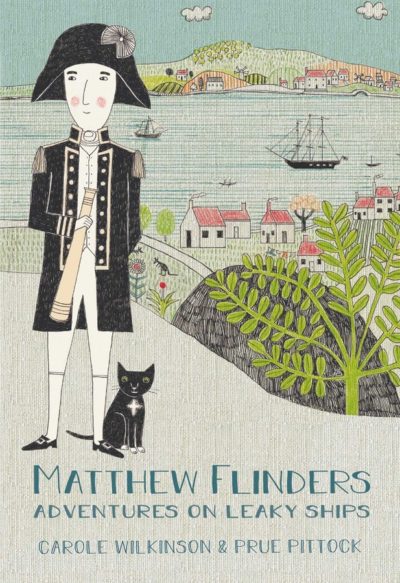 It was a copy of Robinson Crusoe that inspired adventures at sea in Matthew Flinders, but his hero was Captain Cook.


After becoming friends with surgeon George Bass, the two both longed for the same thing – to explore the New South Wales coast that Cook himself had left unfinished.

The Tom Thumb was very small boat but it was all they had. This was the beginning of a lifetime of discovery and exploration for both men and the continuation of a great epoch in Australian history.

It was on the leaky ship Norfolk, with George cataloguing plants and animals, that high seas threatened. Matthew Flinders named Bass Strait after his friend.

But they soon parted, each going their own way to follow the path they loved. Matthew lost his best friend. But he had Trim, his cat.

This is the story of Matthew Flinders’ short life; of all his explorations and discoveries, always in leaky ships. His secret marriage to Ann had her waiting ten years for his return. They had very little time together as he was very sick when he returned.
He died at forty years old, the day after his journal came back from the printers.
Written in language accessible to a younger audience, Flinders’ story tells of a determined and courageous man that allowed nothing to keep him from his dream of exploring the New South Wales coast, a journey that Captain Cook had left incomplete.
End pages are filled with maps of Matthew Flinders’ voyages. A gorgeous map of Flinders’ circumnavigation of Australia winds up the excellent narrative. The navigational equipment employed on the ships are featured and named with an explanation of their use.

Beautifully illustrated in fine line detail, it also includes in the text, how all the areas Flinders discovered were named and also, the naming of Australia.