Review: Letters to Leonardo: The Truth Changes Everything 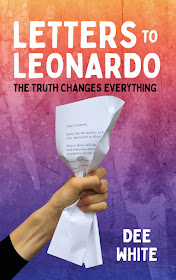 Is it ever okay for a parent to lie to a child?

All of his life – or the part within living memory – it’s just been Matt and his father, Dave Hudson. Dave is an earnest sort who constantly seeks parenting tips from a well-thumbed book. So when Matt discovers that he has been lied to for his entire life– that his dead mother is actually alive – his world is ripped apart.

White takes the reader on a heart-wrenching journey. Matt is furious and takes his anger out as best he can, lashing out to hurt Dave and getting into trouble with the police.

Very well written, the reader can feel Matt’s visceral reactions. Matt has no guide, nobody who understands him, so turns to a fellow motherless person  - Leonardo DaVinci, in a series of letters to explore his feelings and responses.


Matt is as determined to find his mother as his father is to stop him. However, his investigations lead him to dead ends until a chance viewing of a painting gives him the clue he needs.

Naturally, Matt is both fascinated and terrified, but he eventually meets his mother and she suddenly becomes a part of his life.

His mother alternates between encouraging a relationship and pushing him away, like a tide that ebbs and flows but has to run its course. Despite Dave’s pleas and warnings to not trust her, Matt is naive and vulnerable because he wants what all his peers have – a Mum. And although he wants the truth, he does not always hear it when it is spoken.

Matt opens himself to her, which leads to a whirlwind of events. His mother’s behaviour becomes gradually more erratic, and Matt learns just how profound the effects of a mental illness are: her bipolar disorder dictates every moment of her life. And because he is now a part of her life, it reverberates onto him.

The events climax in a tragic ending that will shock the reader.

Read KBR's special guest post by author, Dee White, in which she outlines the motivation behind this alternative ending second edition of her original novel, Letters to Leonardo.